Salander - The Fragility of Innocence (2015) 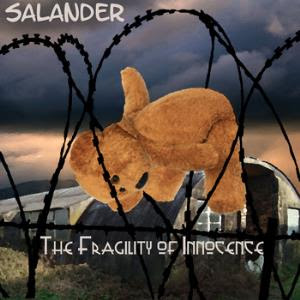 The fourth album from this British duo.

The duo had a lineup of bass, guitars, mellotron, synths, loops, organ, piano and vocals.

They were helped out by two guests who provided drums and vocals.

I gather this is the final Salander album as one of the members of the duo moved to Spain/Portugal and started his own project.

Salander was a duo who released four hit and miss albums. One of the albums, Stendec, was a good album. They deserve to be remembered by their enthusiasm and that album.

This album starts with a narration about Holocaust, the darkest ever chapter in the history of mankind. I think this album is some sort of a concept album of the evil that human beings does to each other.

The music is, very suitable, melancholic neo-prog. It reminds me a lot about neo-prog from Poland.

The band is not very technical on their instruments and is more reliant on good tunes.

Half of the tunes here is good and the rest of decent. It is not a bad album at all and deserve to be checked out.