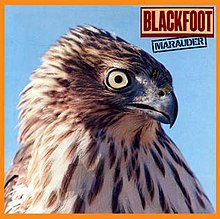 The fifth studio album from this US band.

The band was a quartet with a lineup of percussion, drums, bass, guitars, keyboards and vocals.

They were helped out by a quintet who added banjo, horns, trumpet, keyboards, percussion and backing vocals.

The band continued their mix of southern rock, stadium rock and heavy metal. US heavy metal, that is.

The band and their music is as American and born in America as it is possible to be. They have even thrown in some rockabilly and country'n'western here to underline where they comes from.

The music is a mix of what USA could offer in the late 1970s.

The music is decent enough and so is this album. Ricky Medlocke sings as good as he can. The rest of the band is OK too.

This is not the most exciting band and music around. But it is still a decent album.