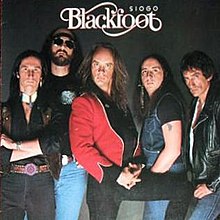 The sixth album from this US band.

The band was a quintet on this album with a lineup of drums, percussion, bass, guitars, slide guitars, keyboards and vocals.

The band continued their career with this album.

The band still stick to the well known Blackfoot formula.

That means US hard rock blended with some southern rock. Fifty fifty of both genres, I would say.

The songs are decent enough with a couple of pretty good Ken Hensley penned songs as the best songs.

The music is pretty hard and very typical US hard rock.

The result is a decent enough album who will please all fans of old US hard rock.