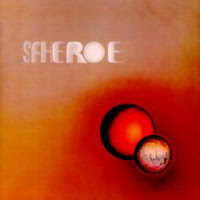 The band was a quartet with a lineup of drums, percussion, vibraphone, bass, guitars, synths and piano.

The band released two albums before they disappeared again. The second album was released in 1978 and I will post a review of that album sometimes soon.

The music on this album is fusion with some pretty strong jazz influences.

The music is more jazz than rock, to put it like that.

The music is pretty dynamic with a lot of guitars and synths.

There are also some good vibraphone here.

Most of the music is decent to good. There is no great pieces of music here. But the three quarter of an hour with this album is ticking over quite nicely and it is a nice album. But there are far better albums out there in this genre.

Collectors of fusion albums should check out this album.