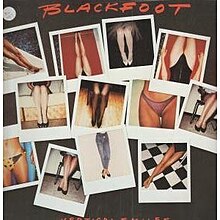 The seventh album from this US band.

The band was a sextet on this album with a lineup of drums, percussion, bass, guitars, keyboards and vocals.

Both Rickey Medlocke and Ken Hensley (Uriah Heep) was still present on this album while the original guitarist Charlie Hargrett left the band halfway through the recording of this album due to his disgust with the songs on this album.

The band went for commercial rock on this album. They included no less than three cover tracks too. Rock songs, no less.

The band had retained a hard rock sound. But the songs are mainly straight rock.

There is no denying that the extreme poor cover art-work is alluding the quality inside this album.

The quality of the music on this thirty-five minutes long album is very poor.

This album is no less than a turkey with beak and feathers galore.